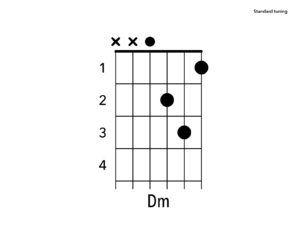 You can see on the chord chart that the basic D minor chord or first position chord is played with the notes D A D and F. If you are not familiar with the chord chart. Let me review that real quick for you.

The Chart represents the top of the guitar neck as if you were holding the guitar up in the air by the neck. What you can see is the first four frets of the guitar, they are represented by the numbers on the neck, and the horizontal lines.  The vertical lines are the six guitar strings.

The thick line at the top of the guitar is the nut of the guitar. Above the nut there are two X this mark indicates do not strike the string. The Dot next to the X indicates pick the string. As well as the other dots in the diagram.

How do You Make D minor Guitar Chord

The Best Way to Practice the D minor Chord

Once you have your fingers in position on the right fret and string, start from the D string which is the fourth string. There is a  great post to learn all the notes on the fretboard. If you need to learn how to know where the notes are on each string click here.

Start on the fourth string, and pick one string at a time. Down to the first string. There are a few things to remember when you are making the chord.

We are not attempting to strum at this time. Once your fingers are in place. Pick the strings one string at a time. Use the chord chart to  see what strings you are to pick.

Once you have made the adjustments you are ready to strum. If you need help learning how to strum click here for a great resource.

Here is a D minor scale: D E F G A Bb and C. What we need to find is the root note. Which in this case is the “D”, the root is the tonic of the chord. The “tonic” is the note on which a scale or key is based. Next what is the third? We need to find the third position which is F. Last note we need is the fifth position, which is A.

A simple answer to the question what are the D minor chord notes? D, F, and  A.

The next way to make a D minor chord is a barre chord. This is more of the next phase of playing guitar. When you first start playing you learn the first position chords, Basic chords like the D minor chord position previously mentioned. Here is another form of the D minor chord.

This D minor chord form is whats called a fifth string root chord. Why You ask? Because the root note is on the 5th string. It is also a Barre chord. So it is a D minor Barre chord.

If you don’t know where the notes are on the guitar, you can signup, and get a free guide to learn all the notes on the fretboard. You will also get free guitar tips and tricks sent to your inbox each week from the Guitar Essentials Blog.

What do you mean you haven’t heard of Truefire? The Number 1 Resource to Learn Guitar online. Whether you’re a Beginner, Intermediate or Advanced guitar player Truefire has the Path for you.

With the ALL ACCESS pass you can continue your journey to greatness.

Get Streaming access to every course in the Library. To include:

With 140+ top Educators for all styles and skill levels. You can learn anywhere anytime on any device. With three different payment options to suite your needs.  Click here for current pricing on Truefire All Access.

The notes are as follows; The fifth string, fifth fret is the D, the Root note. Then on the fifth fret at the first string is the A note. On the fourth string seventh fret is another A note. Next the Pinky is holding the third string, seventh fret D note. Last we have the second finger at the sixth fret, second string playing the F note.

Click the link If you want to know more about the 5th string Root Barre chords. 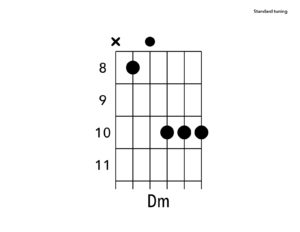 This D minor chords guitar form starts on the eighth fret of the guitar. The note on the fifth string eighth fret is an F. You play it with your first finger. The fourth string is played, but it is an open D note. Open meaning  pick the string, but the string is open. Next is the third, second, and first strings at the tenth fret. Played with the third finger, and  it is barred across the three strings. Those notes are F, A, and D respectfully.

If you have enjoyed this post check out some of the Video’s, and posts in the Guitar Essentials Blog. If your looking for Recommended Gear click the link.

How to play Wagon Wheel by Darius Rucker

How to Play While My Guitar Gently Weeps by The Beatles

Check out the Gear Shop for your guitar Accessories